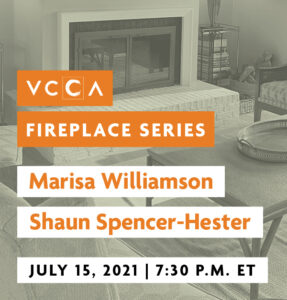 Williamson will present a series of projects stemming from her early performance work focused on the historical persona of Sally Hemings, the enslaved mother of four of Thomas Jefferson’s children. Read more about Williamson and her work below.

Marisa Williamson is a project-based artist who works in video, image-making, installation and performance around themes of history, race, feminism, and technology.

She has produced site-specific works at Monticello, and by commission from Storm King Art Center, the Metropolitan Museum of Art, Monument Lab, and the National Park Service.

She has had solo exhibitions at the University of Virginia, the University of Washington, and SPACES in Cleveland. Her work has been exhibited in venues nationally and internationally including Real Art Ways (Hartford), The Print Center (Philadelphia), Neuer Berliner Kunstverein (Berlin), BRIC (Brooklyn), Human Resources (LA), Stefania Miscetti gallery in Rome.

Williamson has received grants from the Rema Hort Mann Foundation, the Schlesinger Library on the History of Women in America, and the Graham Foundation. She was a 2012 Skowhegan participant and attended the Whitney ISP from 2014-2015.

Williamson holds a BA from Harvard University and an MFA from CalArts. She lives and works in New Jersey, and in 2021 will join the faculty of the McIntire Department of Art at the University of Virginia as an assistant professor of media arts.