This fellowship was established in 2017 in honor of Harlem Renaissance poet and civil rights activist Anne Spencer. Funded by Elizabeth Logan Harris, Frankie Harris Slaughter, and Lyall Forsyth Harris, the Anne Spencer Fellowship provides a one-month residency and $1,500 honorarium to writers, visual artists, and composers of African American descent. The VCCA residency at Mt. San Angelo includes a private bedroom with private bath, a separate individual studio, and three meals a day in a community of cross-disciplinary artists.

Anne Spencer Fellows tour the Anne Spencer House & Garden Museum and participate in one of the following in the Lynchburg community: a public presentation; a workshop at Anne Spencer partner schools; or another community-based activity in coordination with the Anne Spencer Memorial Foundation, Inc.

Residencies Available: May 1 – August 31, 2024
Length of Fellowship: One month
Honorarium: $1,500 upon completion of residency

To be considered as an Anne Spencer Fellow, complete the “Application for Mt. San Angelo Residencies, VCCA in Virginia – Summer 2024,” selecting your fellowship interest in Question 2. 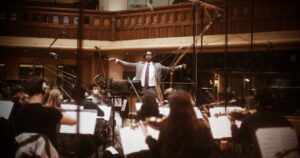 Jared Smith is a young, up-and-coming, LA-based composer. As a double bassist, he grew up playing in a wide variety of ensembles that heavily informed and shaped his musical sensibilities, including symphonies, big bands, chamber ensembles, opera pits, and more. He has lived and studied abroad in four different countries. He spent his summer in 2019 studying abroad at the Film Scoring Academy of Europe in Varna, Bulgaria. This was where he had his first opportunity to write and record for large orchestras, and also have his music played by musicians in the Varna Opera. In Fall 2020, Jared studied at the Berklee College of Music campus in Valencia, Spain, where he would receive his Masters in Scoring for Film, Television, and Video Games. Jared is currently living in LA, where he is writing music for a plethora of mediums. He is also working as an assistant to composer John Kieth on shows such as Bob’s Burgers and Central Park.

While in residence at VCCA in 2021, Williamson participated in a VCCA Fireplace Series event streamed live from the living room of the Fellows Residence at Mt. San Angelo. You can watch a recording of the event below. VCCA Fellows Council member Sonja Curry-Johnson hosted the evening which also featured special guest Shaun Spencer-Hester who discussed the legacy of Anne Spencer.