Established in 2016 and first awarded in 2017, the Steven Petrow LGBTQ+ Fellowship is open to writers in any genre who self-identify as LGBTQ+. This juried fellowship is awarded on a competitive basis, and the selection is made based on the quality of the submitted work. The Petrow Fellowship provides a fully-funded, two-week residency at Mt. San Angelo, which includes a private bedroom with private bath, a separate individual studio, and three meals a day in a community of cross-disciplinary artists.

Eligibility: Writers in any genre who self-identify as LGBTQ+

To be considered as a Steven Petrow LGBTQ+ Fellow, complete the “Application for Mt. San Angelo Residencies, VCCA in Virginia – Fall 2024,” selecting your fellowship interest in Question 2.

Steven Petrow is an award-winning journalist and book author who is best known for his Washington Post and New York Times essays on aging, health, and civility. He’s the author of multiple books, including Stupid Things I Won’t Do When I Get Old and Steven Petrow’s Complete Gay & Lesbian Manners. His 2019 TED Talk (“3 Ways to Practice Civility”) has more than 1.6 million views. Steven’s work has been published in Time, The Atlantic, The Daily Beast, Los Angeles Times, and USA Today. Much of his work over the past decade has taken place at VCCA; he is grateful for the time, space, and magic at Mt. San Angelo and currently serves as a member of the Board of Directors. Previously, Steven was the president of NLGJA: The Association of LGBTQ Journalists. He lives in Hillsborough, N.C. 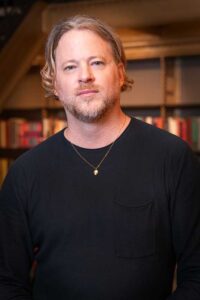 Nicholas Boggs is co-editor of James Baldwin’s Little Man, Little Man (2018) and is currently at work on a literary biography of Baldwin, under contract at Farrar, Straus and Giroux.

His work has been supported by fellowships from the NEH, the Leon Levy Center for Biography, Biographer’s International Organization, and the Eccles Centre for American Studies at the British Library. His work has been anthologized in The Cambridge Companion to James Baldwin, James Baldwin Now, and Best Gay Stories 2013.

Read more about Boggs and his work.

While in residence at VCCA in 2021, Carter Sickels participated in a VCCA Fireplace Series event streamed live from the library of the Fellows Residence at Mt. San Angelo. You can watch a recording of the event below. VCCA Fellows Council member Iraj Isaac Rahmim hosted the evening which also featured a reading by Steven Petrow.