A Kaleidoscope of Pitch

Home » A Kaleidoscope of Pitch 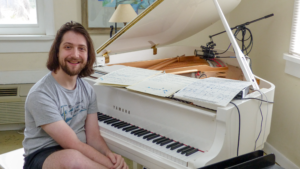 Composer Alexander Blank is working on a solo piece for flute. This might seem like enough to fill a residency, but it is not a typical musical score. Much of the music that Blank writes is microtonal, or “using pitches that lie in-between the white and black keys of the piano,” and these explorations have opened up his compositions to literally billions of additional possibilities.

Blank uses a natural phenomenon called the harmonic series to organize his musical ideas and sound palette. For this piece, Blank looked at the first 64 pitches found in the harmonic series and narrowed that number down to 21 unique pitches that vary in how far “out-of-tune” they sound. He then ordered them “from the highest level of sharp to the lowest level of flat” and placed that range on a gradient colored scale. This visualization assisted him in analyzing the properties of each of the chosen pitches and how they relate to each other in various ways. He calls it “a kaleidoscope of pitch.”

“The visualizations may be helpful for the musicians too, but they are mostly to help myself,” he says. “The visualization of the piece’s embedded structure shows all the possible paths the music could flow and is the basis for the app.”

Blank is writing an application that will help the solo flutist work through the piece. The app looks at each collection of notes and gives the “pivot options” of which set of notes (and in what order) could come next, allowing the performer to essentially choose his or her own musical adventure.

“It has been an iterative process,” Blank states, “I’ve written the music. Now I’m writing the code and a description of the music; each event that takes place and the data that is assigned to it. All of this goes into a spreadsheet which the code then parses to create a custom score based on the performer’s choices from every possible option.” How many options, you may wonder?

This level of choice gives the performer the ability to explore consonance and dissonance while having control over the piece. And if every version were played back to back without pause or repetition, it would take somewhere between 17,000 and 27,000 years. Writing the app gives Blank control over a composition that he will never hear every possible version of.

“The neat thing,” he says, “is that a musician could find a version that had never been performed before and sort of have their own world premiere.”

While at VCCA, Blank also intends to finish a string quartet, the first five minutes of which were performed by Quartetto Indaco at the 2017 highSCORE Festival in Pavia, Italy.

More about Alexander Blank and his work is on his website.